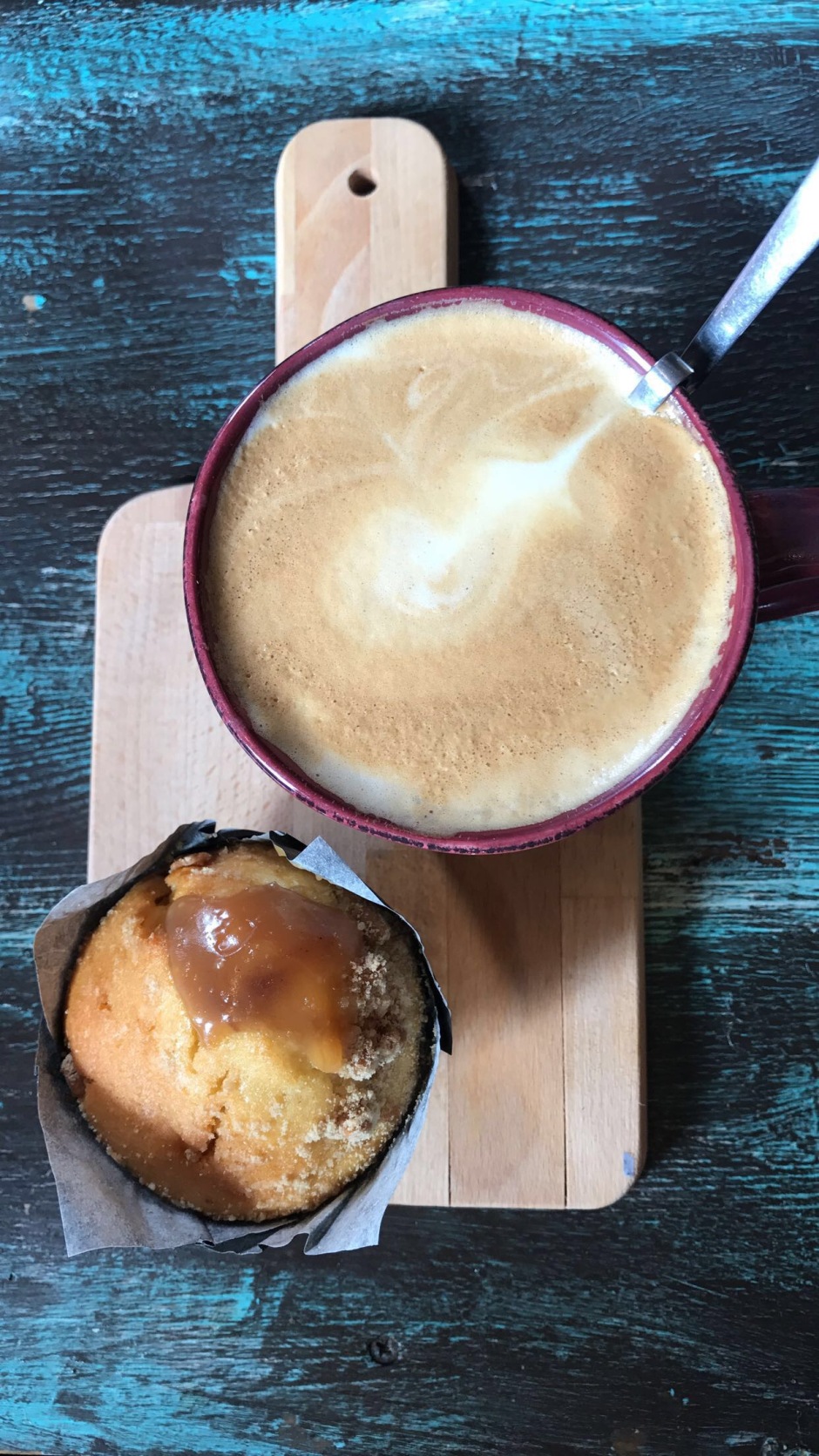 Iceland is amazing! For a place that leaves you imagining a terrain that is covered in frozen water, it is far from that. The sixteen hours that consisted of our first layover in Europe included some of the prettiest views with the nicest natives. As we wandered around trying to find out the vegetarian restaurant because Liz had decided to become vegetarian right before our trip, we ran into a woman outside her house weeding her front walk to ask for directions. She was unsure of where we wanted to go, but she insisted on grabbing her son from inside to help us find our way.

Along with our walk to dinner, we walked past a church that was built in 1517 and featured a statue of Leif Ericson who was a Norse explorer from Iceland. He was the first known European who discovered America before Christopher Columbus. The detailed architecture and just the overall massiveness of the church became our point of reference as we navigated through the city. 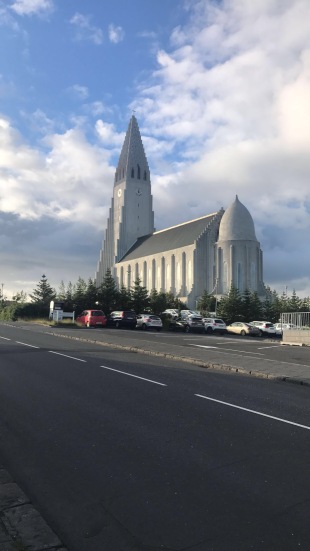 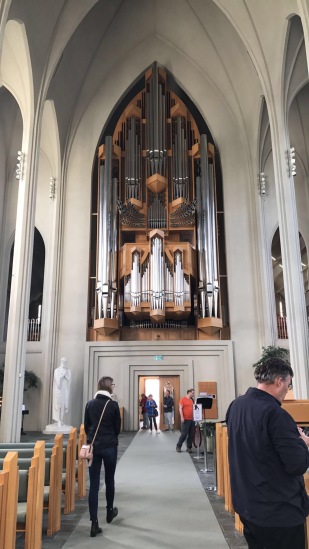 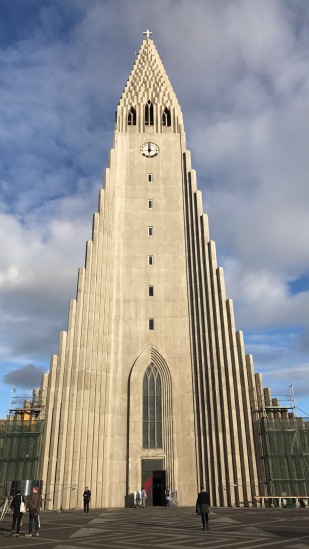 Everywhere we looked we could see the ocean surrounding us. You would think that with a 16-hour layover we would have very little time to actually explore, however right now the sun sets at 11:45 pm and rises at 3:30 am, giving us ample daylight hours to venture throughout the city. Iceland has become extremely touristy, but the culture, people, and picturesque views are unparalleled.

Would I visit Iceland again? Hell yes! It is on the pricier side but the food was fantastic, the people friendly, and the overall feel of this country was like walking into a small town, where everyone seems to watch out for each other. The terrain consists more of rock and dirt leaving the majority of your surroundings with a grayish hue, however, at all times you can find yourself walking along the Atlantic Ocean making it hard to really miss the greener landscape.

Iceland is seven hours ahead, and by the time we had arrived in Reykjavik, we were exhausted from our miserable flight that we needed not just a nap but a hot shower. This left us staying up for the majority of the night even though we had to wake up at 3 am to catch a bus to the airport for our flight to Dublin, Ireland. 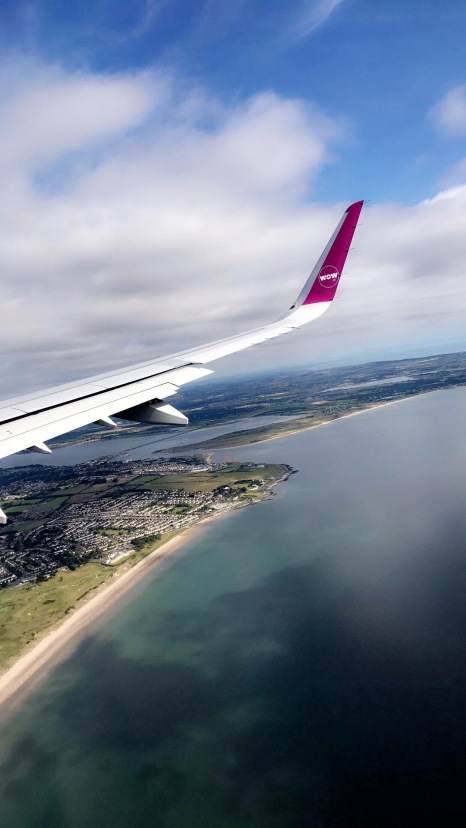 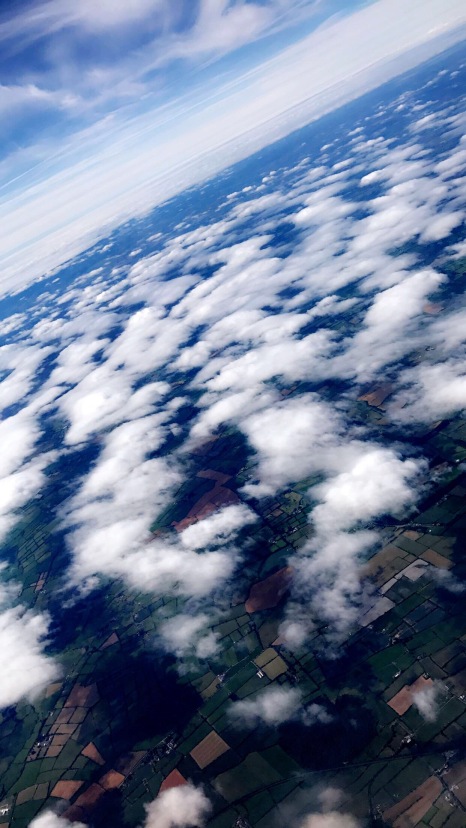 Our trip to Dublin was two hours and forty-five minutes, which gave Liz and I an excuse to nap since we had slept very little the night before. Once we arrived to Dublin International (our hostel for our visit in Dublin), we checked in and were quickly talked into paying 12 euros for a pub-crawl that was happening at 7:30 pm in Temple Bar (an area that consists of primarily all bar and night clubs). We took a quick nap, changed and headed towards the first location where we were able to grab dinner as well as our buy one get one free discount that came with the pub crawl purchase. The food was delicious, and the bar had a live band that played all of the heart wrenching, good times music. The pub-crawl was fun, Liz and I drank probably our approximate weight in beer and met two amazing people who also happen to be from the states traveling as well for the summer.

Every bar is different. The bars could be situated right next to each other, but you could hear the top 40’s playing in one and Reggaeton music playing in the other. Smoking culture is what football is to the United States, everyone participates, and it is always a group activity. Walking down the street, you will see tiny cafés with some of the best coffee I have ever tasted, and the outside seating will feature individual ashtrays for every table.

Dublin is different than Iceland in many ways. Starting with the scenery, green is everywhere. Parks that feature beautiful green grass and benches are everywhere. The detailed architecture, however, is just as intricate as what you can find in Reykjavik. Liz and I have agreed that at the end of our trip we will together choose a place that we loved the most and come up with a small tattoo idea to commemorate our travels together. This is your opportunity as a reader to give me crap about this if I come back without a tattoo.

Our first full day in Dublin was perfect! Liz and I finally had an opportunity to wander around the city and go to every museum we could manage to walk to. We started off at the Dublin Writers Museum, which featured a few of my favorite authors like James Joyce (Ulysses), Oscar Wilde (The Importance of Being Earnest) and Jonathan Swift

(Gulliver’s Travels). We then headed to Trinity College, which was the school that the famous authors listed above attended. This school is still functioning, and it was mind blowing that a school like this even existed. The building shown in the picture is just one of a campus full of large elaborated buildings. You can see the inspiration these authors felt as you walked across the campus and down the streets of downtown Dublin.

We soon headed to Dublin’s Archeology Museum, and we learned more about the Vikings that settled in Dublin as well as explored the Egyptian exhibit. Our feet were swollen after all the walking, so we hitched ourselves on a bus and headed back to the hostel for an early dinner of fresh baguette, cheese, and wine, that we ate in the hostel’s courtyard.

Tomorrow Liz and I head to the west to see the Cliffs of Moher and then down the west coast near the water to Cork where will we Blarney Castle. We have rented a car, and I am excited to finally crossing off driving on the wrong side of the road off on my bucket list!